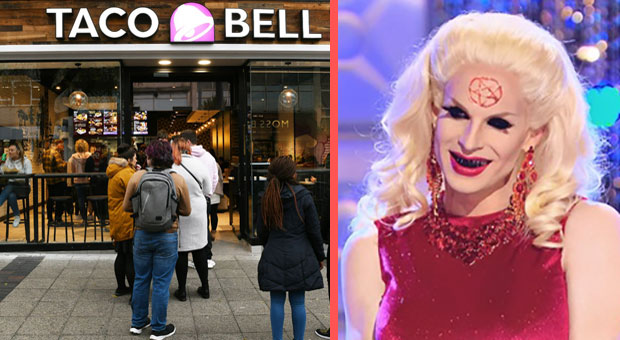 Men dressed in women’s clothing will ‘perform’ while customers eat

Restaurant chain Taco Bell has announced its new “Drag Brunch” events that have been launched at several locations across America.

The events will feature drag queens “performing” while customers eat.

“Each show will be hosted by the fabulous drag performer and taco extraordinaire, Kay Sedia, and feature performances from local queens and kings that will transform any morning from Mild to Fire!” according to a Taco Bell press release.

“As a brand that brings people together, the Taco Bell Drag Brunch experience is rooted in celebrating the LGBTQIA+ community and creating safe and welcoming spaces for all.”

Men dressed in “women’s” clothing will be “performing” at Taco Bell Cantinas in several cities.

The first event took place on May 1 in Las Vegas.

There are also events scheduled for Chicago and Nashville later this month.

Taco Bell kicked off the new drag brunch at the firm’s flagship cantina in Las Vegas. “We understand the importance of creating safe spaces for the LGBTQIA+ community.” pic.twitter.com/vl6AK2jKrz

“We understand the importance of creating safe spaces for the LGBTQIA+ community and are thrilled to provide a unique experience that spotlights and celebrates the wonderful artform of drag and its influence in culture with their chosen families,” Taco Bell global chief brand officer Sean Tresvant said, according to the press release.

“Taco Bell Drag Brunch was concepted by Live Más Pride, Taco Bell’s LGBTQIA+ Employee Resource Group, which has played a major role in driving awareness of and meaningfully supporting LGBTQIA+ communities both within Taco Bell and the communities we serve and operate in.”

Another response to Taco Bell’s tweet declared, “@tacobell you people are SICK and I don’t go to a restaurant to watch this sickening crap!”

And apparently, she will appear on the show again — a video montage about an upcoming season reveals that the lawmaker will make an appearance in the new season.

[RELATED] Teacher Tells Kids: Parents are ‘Bigoted’ if They Object to Drag Queens in Schools

The Middle East Crisis – What's Next in Bible Prophecy Part 1