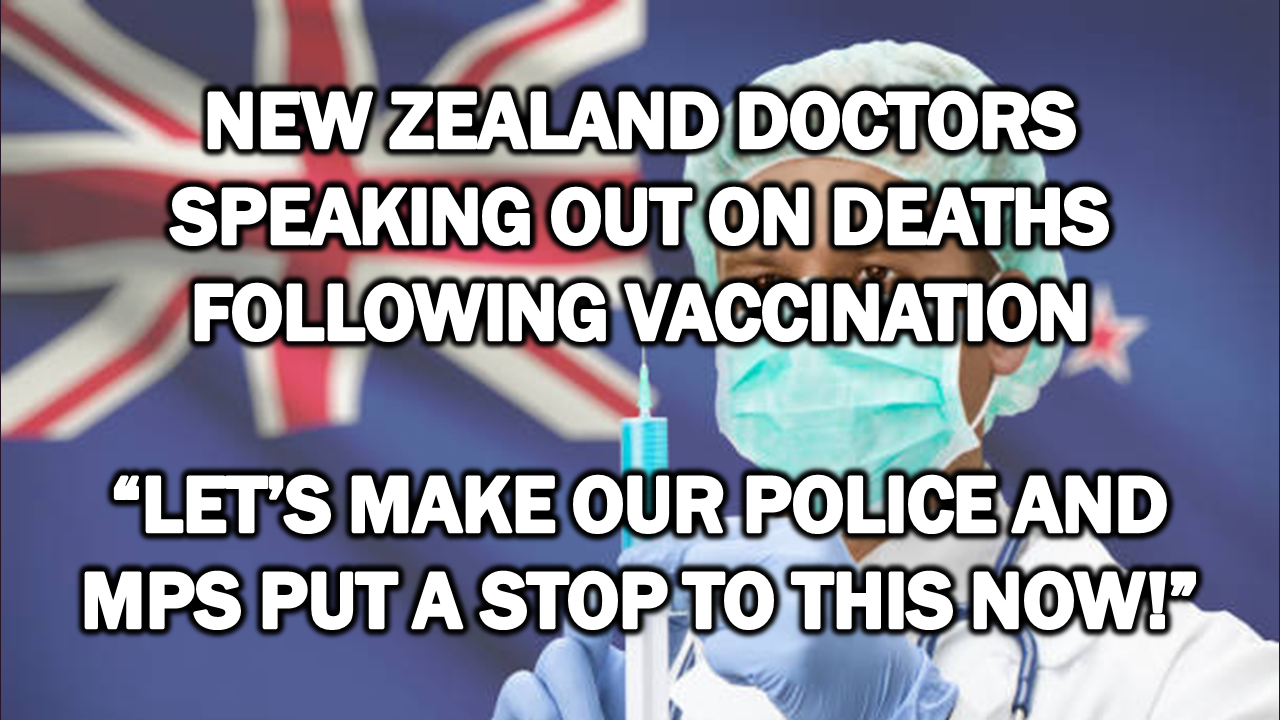 On Tuesday New Zealand Doctors Speaking Out with Science (“NZDSOS”) published an open letter on the need to investigate deaths following vaccination, of which “an unredacted version is being prepared for the Police.”

NZDSOS is a group of doctors, dentists, pharmacists and veterinarians and has formed alliances with other groups both locally and internationally: “We are not alone. We are one of many.”

“We appeal AGAIN to the Police, headed by Andrew Coster, and our MPs, to intervene to protect the People,” NZDSOS states in their letter titled ‘Deaths Following C-19 Vaccination’.

There is a shockingly large burden of deaths and injuries following the Covid-19 vaccines, of itself and compared to any other treatment or vaccine in modern times. We report many cases that DEMAND proper investigation, as befits any medication lacking safety studies.

Our surveillance systems have been disabled in order to hide the extent of harm. Adverse event reporting is NOT COMPULSORY, and this alone undermines any attempt to portray the injections as safe.

Children and young people are dying and suffering particularly cardiac injuries (though many healthy elderly have died too), whilst their risk from covid-19 is particularly low. We believe we are being lied to. We present many cases halfway down this post.

Deaths Following C-19 Vaccination: Deaths by Regulators, What More Can We Say and Do? NZDSOS, 24 May 2022

The Health Forum volunteers have backgrounds in healthcare, science and information technology, and have received training and support from epidemiology and database professionals. “The volunteers who collate the reports work hard to verify their accuracy, and it is often months for the complete or important details to be obtained,” NZDSOS’s letter states.

The Citizen’s Database is the result of an alarming lack of official response to the clear pattern of significant harm from the Pfizer injection program. Children and adults of all ages continue to die and be injured in appalling numbers around the world and here at home.

“It is absolutely essential that some sort of register is kept since the product is experimental, reporting systems around the world were already showing very alarming signals even before our NZ rollout began, and these have continued to do so. Most astonishingly, it is not mandatory for health workers to report vaccine side effects here in NZ. In fact, it is true to say that we are lacking an effective regime of pharmacovigilance entirely for this single reason only, given that this IS an experimental drug trial,” NZDSOS’s letter notes.

At the time of writing, the Citizen’s Database had recorded nearly 500 deaths post-Covid injections.  At the end of their open letter, NZDSOS lists about a third of these deaths. “Note just how many dead people are young, children even, and suffer sudden, unexpected deaths, typically from blood clots affecting brain or heart,” writes NZDSOS.

After listing several reasons why this is happening, including a section titled ‘Blood Money?’, NZDSOS answers the question: Put it all together and what have you got?

NZDSOS concludes: “There is an evolving humanitarian crisis, and the government, police, vaccine industry and most doctors are lost at sea. For God’s sake, people, let’s make our police and MPs put a stop to this now!”

About halfway through their letter NZDSOS dedicated a section directed to the Police (see below).

To the NZ Police, who have the actual patient’s names, we say this:

It is not enough to hide behind apparently controlled, failed or corrupted government institutions.

You are here to defend the public good. Period. You are supposed to know wrong from right; lies from truth.

You have ignored 3 open letters from our legal colleagues discussing vaccine harms, and alleging serious vaccine contamination. Evidence we have submitted that alleges the same and suggesting criminal dereliction by the Medsafe regulator has been denied by Police commanders, who say it does not reach a standard representing harm. Yes, it is all indeed “preposterous”. They shelter behind Medsafe’s responsibility to investigate but they refuse to act in the face of it’s inaction. As we have said before, your vaccinated staff belong to the wider citizenry receiving these contaminated products.

We are alleging death by regulatory failure, as you know. You will see in the summarised death reports (representing a third of over 450 available) that there are some allegations of professionals and Police deviating from the usual processes that should follow a possible death from medical treatment. Of course, the unredacted list we give you is absolutely confidential except as needed for your formal investigations.

If one human being can behave in a compromised way in organisations where control and intimidation come down from on high, it is very likely – inevitable even – that many others will too, thus enabling a system-wide collusion that may not be obvious to individual actors, who see themselves ‘just a cog in the wheel’. Some of these people do feel a personal or collective guilt, so then an instinct to press on, to keep quiet, enabled by their superiors and being in far too deep to pull back or speak out by this stage. We have spoken to a few workers who are convinced their lives would be at risk if they go public, even with whistle-blower protection laws. A few claim they have precedents for these views, which is truly shocking for us to hear. May these people have a safe arena in which to tell their stories soon.

Plenty of evidence has gone to file number 220215/0669. Here is some more. We allege fraud on the PCR test. This evidence is now a year old but Dr Jessica Rose, a statistician, has just used the Wayback machine to show real-time scrubbing of incriminating evidence of pre-planning.

Here at home, through Official Information Act requests; by following the course of individual reports made to CARM; and by questioning individuals involved, we say there is enough deception, denial, obfuscation and opacity to suspect cover-ups of evidence of harms, even down to the of deleting injury reports made by patients directly to Medsafe and MoH itself. We know that the MoH pre-screens reports of injury and deletes some before sending the rest on to the Centre for Adverse Drug Monitoring (CARM), a private organisation headed by Professor Michael Tatley at Otago University. Both he and MoH each say the other has final responsibility for attribution of vaccine to the injury, but there are other individual players, committees and apparent ‘black box’ mechanisms to complicate things further.

If you wanted, you could simply interrogate the government’s Covid Immunisation Register (CIR) and cross-check against the Register of Births and Deaths. Or we will do it if you can get us access to the raw data. But we see you are busy recruiting your new “Covid enforcers” to start 1st September. Wouldn’t it be better to train more detectives to investigate all these deaths, and find any criminals responsible? Or are they somehow protected?

The above are a few extracts from a lengthy letter filled with important information.  Please read the full letter, ‘Deaths Following C-19 Vaccination’, HERE, especially if you are in New Zealand or have friends or family that live there.

IUIC | THE BIBLE: BOOK OF OUR FATHERS | Biblical Prophecy Vs. Man's (Deliverance and Destruction)