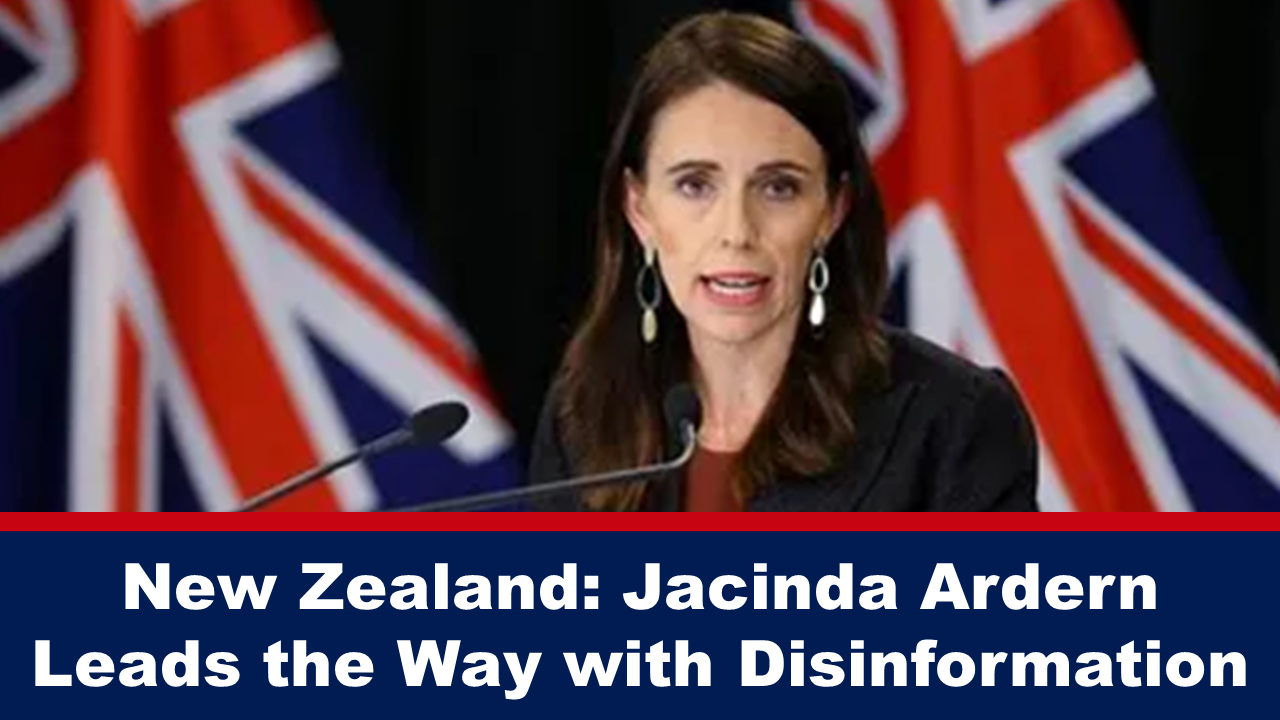 Jacinda Ardern, who has escaped the continuing restrictions in New Zealand to visit Europe and speak at NATO, has met with her counterparts in France and Spain to suggest a global alliance to combat disinformation. Ardern spoke to them about the New Zealand capital grounds riotand played to her gullible audience by suggesting the threat to social cohesion and public health in New Zealand society was originating in Russia and might result in war.

Ardern has had talks with President Macron which reportedly included disinformation. I am not sure that the events in Wellington would have qualified as a riot in France. There were no Molotov cocktails of the kind you see in the frequent French protests, mostly people were playing music, engaging in conversations, and enjoying camping out, whilst standing up for their rights—something legally allowed in New Zealand. I suspect that Macron probably relied on Ardern as his ‘one source of truth’ when it came to descriptions of NZ riots (??).

How is it possible that our lame-duck prime minister can swan about in the military circles of Europe making outrageous claims about New Zealand society without being challenged by our press? Quite the reverse, Stuff newspaper seemed to enjoy reporting Ardern’s sensational characterisations of NZ protests.

It seems to me that many of the world’s current leaders are busy winding each other up with more and more outrageous exaggerations which only serve to up the fear factor among themselves. They are victims of disinformation, but it appears to be of their own making—acting like villagers rushing about in a panic when someone shouts out ‘snake’ when they have only seen a rope.

In such a panicked atmosphere, it is hard to strike up a rational conversation with our politicians. All parties have firmly closed the door to two-way communication with their constituents on pandemic policy. Public information has become limited to a succession of carefully-crafted, government-approved sound bites, which fade rapidly together into an aggregation of false interpretations and assumptions which inevitably take root in our social psyche.

We are daily schooled to be afraid. We are in the middle of a pandemic (??), which is clearly now milder than the flu, promoting a vaccine (??) which doesn’t work and causes severe adverse effects. We are religiously trained to wear masks which studies show don’t work, and whose constant use is proven to cause headaches and respiratory defects. Our every move is being tracked by Apps which collect our personal data that can and are being misused.

For six months I have been writing at the HatchardReport.com long format refutations of disinformation being promoted by our government. I have consistently referenced my work to published scientific work in learned journals. Unfortunately, solid information in the modern age has become fleeting and quickly forgotten.

No sooner have you shot down one canard such as the effectiveness of mRNA vaccines (they are not effective and don’t deserve the name vaccine) through reference to many studies, than a government advertising campaign starts up, as it did this week, telling the public in 30 seconds that mRNA vaccination provides greater protection than anything (yes anything) natural immunity can provide. Clearly, the government’s advertising copywriters did not read this British Medical Journal article and couldn’t care less about the truth.

It is a rather one-sided battle if the government has paid the media to report their false story and exclude your referenced discussion. It becomes an organised campaign to deceive the public when the referenced work of scientists is labelled disinformation likely to start a war by our prime minister. The absurdity should make us laugh, but the depth of modern psychological propaganda is being exploited to the full. It is no longer a laughing matter.

The Hatchard Report is available as a record and referenced source of science reporting intended to alert the public to the risks of novel biotechnology. Our public health authorities have never informed us honestly about the long-term risks. Despite the effective collapse of early evidence compiled and widely publicised by Pfizer PR campaigns, our government has doubled down on mRNA vaccine use. Apparently, our health czars have decided to follow the government and ignore the accumulating evidence of harm. It can’t be ignored any longer. They have to stand up to the government disinformation storm.

Last week I reported on a paper co-authored by Prof. Sander Greenland, perhaps one of the most experienced statisticians/epidemiologists in the world. He found a 50% increase in serious adverse events in the vaccinated compared to the unvaccinated group in the Pfizer trial. The authors point out that this finding is consistent with the findings of pharmacovigilance databases in Europe and the US. They also show that the risk of these adverse outcomes exceeds any possible benefit from reduced Covid-19 hospitalisation.

Another article along the same lines is a case-control study from France, which found an 8-fold increase in myocarditis after the 2nd Pfizer injection, compared to millions of controls from the French population.

This is consistent with findings in other areas of the world. For example, a recent study of myocarditis & pericarditis from Hong Kong found a rate of myopericarditis of 37 per 100,000. This is equivalent to 1 case per 2,700 male adolescents injected with dose 2 of Pfizer mRNA vaccine.

There are always going to be many unknowns associated with evolving scientific assessment, but there is accumulating evidence of substantial harm from the Pfizer injection which is accruing from several independent sources. The long-term risks should not and cannot be hidden from the public any longer. Nor should the government be allowed to continue making false assertions of safety and efficacy contrary to scientific fact. The misleading saturation advertising and the public posturing of our prime minister have become a scandal and an embarrassment to our nation.

Dr. Guy Hatchard is a statistician and former senior manager at Genetic ID, a global food safety testing and certification laboratory. He has lectured and advised governments in countries around the world on health and education initiatives.

He is the author of the book ‘Your DNA Diet’ which examines the role of genetic information in nutrition and investigates safety issues in medical settings.

Episode 2: So what about the end times?

Armed for Victory: Prayer Strategies That Unlock the End Time Armory of God