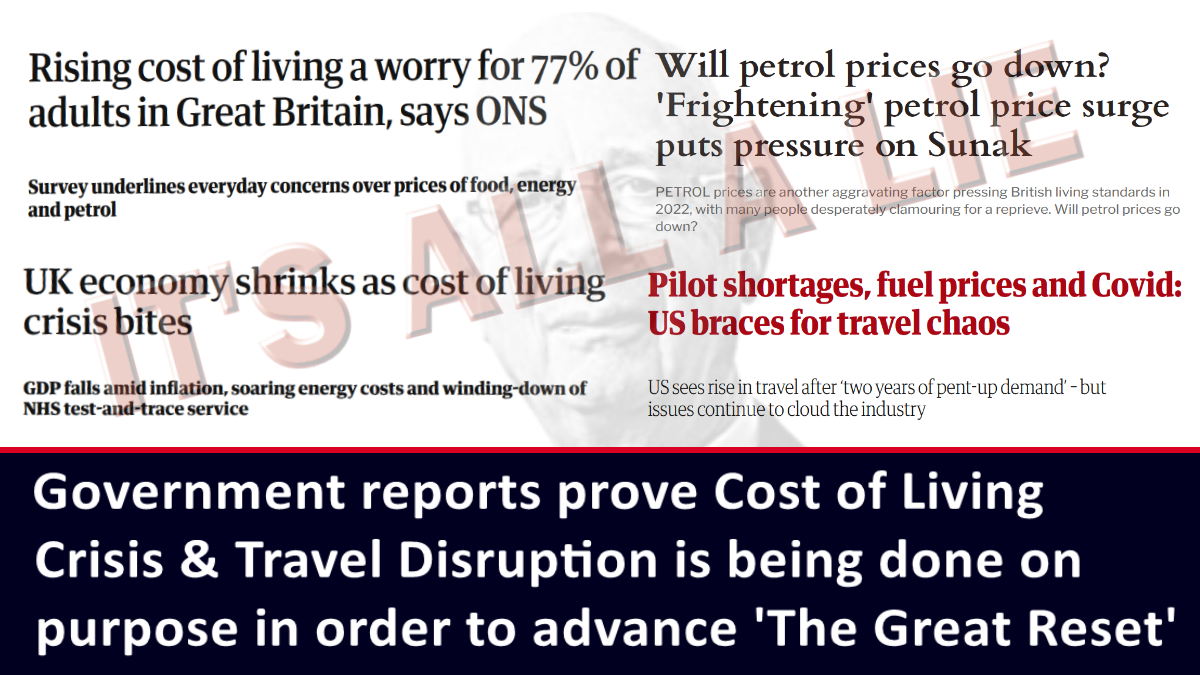 Planes, trains and automobiles. All three of these things are constantly being talked about in the mainstream media at the moment alongside a cost of living crisis, war in Ukraine and an alleged monkeypox outbreak.

Flights are being cancelled left, right and centre ruining planned holidays for thousands. Trains are about to come to a halt in the UK thanks to a “spontaneous” national rail strike. And the average person can just about afford to get to the end of the forecourt after filling up thanks to the spiralling cost of the price of fuel.

Whilst on the face of it, these things may seem like unfortunate events occurring at random, the truth is they are actually all occurring by design, and official government reports alongside historical data prove it.

Well, reports suggest it’s all to do with meeting ‘zero carbon targets’. But that is another charade in itself, so the real reason has something to do with advancing the fourth industrial revolution, where you will own nothing and apparently be happy about it. An agenda that Klaus Schwab, the founder of the World Economic Forum likes to call ‘The Great Reset’.

Over the Jubilee bank holiday, which coincided with many schools’ half-term breaks, 750 flights leaving the UK were cancelled, according to aviation data firm Cirium. Meanwhile, around 466 return flights were axed.

Although cancellations made up a small percentage of total flights, many passengers were only informed at short notice and faced long queues to check in bags and get through security.

Meanwhile, the mainstream media are advertising the fact workers at British Airways are voting on whether to walk out over pay, while wage talks between Ryanair and cabin crew unions in Europe appear to have reached an impasse.

All of this is heightening people’s anxiety about whether these problems will continue into the summer season, and it is putting people off travelling abroad.

For example, Jess Baker, who spoke to BBC News, says that she has been put off travelling abroad this summer after a recent “nightmare” 18-hour journey home from Iceland.

She, her husband Shaun and their two children had their EasyJet flight into Luton cancelled recently.

They were given the option to travel home three days later but needed to get back sooner so paid £1,000 to fly into Glasgow with Icelandair. They shelled out an additional £340 to hire a car to drive down to Luton to collect their own vehicle.

“It’s been an absolute nightmare,” says Ms Baker. “We quickly decided that we’ll go camping here instead. It’s not worth the hassle all over again.”

Plenty of others are also thinking the same, with Sykes Holiday Cottages reporting a 22% rise in bookings over the past two weeks.

Chief executive Graham Donoghue says it is “at least in part due to widespread reports of overseas travel disruption. Travellers simply don’t want to have to tackle airports and take the risk that their family holidays could be cancelled”.

According to BBC News –

Whilst this may be partly true, it doesn’t take into account the bigger picture of what’s really happening here. But to understand that picture we need to look at what’s going on elsewhere with trains and cars.

More than 40,000 RMT Union members from Network Rail and 13 train operators are set to walk out after talks over pay and redundancies broke down. The strikes are due to take place between 21st and 25th June.

Glastonbury Festival is one of several events impacted by potential travel disruption, along with a cricket test match between England and New Zealand in Leeds.

This is yet another example that will promote anxiety among the public about whether it’s worth travelling around the UK. At least by train anyway, but the artificial price of fuel at the moment means most drivers will need to take out a mortgage to travel anywhere by car.

In the UK, the cost to fill up an average family car with petrol recently surpassed £100. The public is being told this is being driven by war in Ukraine and moves to reduce Europe’s dependence on Russian oil. But if this were true, how do you explain this –

Can you see now how you are being lied to when the Government and mainstream media tell you that these rising costs are due to the war in Ukraine?

The truth of the matter is that the spiralling cost of fuel to get you from A to B, the hideous cost of gas and electricity to heat and light your home, the chaotic experience involved with travelling abroad, and the mainstream media hype around rail strikes aren’t all some unfortunate coincidence, they are all being done by design.

In 2019, the UK Government commissioned a report that was produced by Oxford University and Imperial College London. Entitled ‘Absolute Zero’, the report delve into the necessities required to meet the legal commitment of zero emissions by 2050.

The report states other things, that all airports must close between 2020 and 2029 excluding Heathrow, Glasgow and Belfast airports, which can only stay open on the condition that transfers to and from the airport are done via rail.

All remaining airports must then close between 2030 and 2049, as to meet the legal commitment of zero emissions by 2050 every citizen of the United Kingdom must “stop using aeroplanes” for a significant period of time.

What better way is there to ensure airports close, and everyone turns to electric vehicles than causing absolute chaos when it comes to travelling abroad and artificially hiking up the cost of petrol and diesel?

The International Energy Agency also recently demanded Governments worldwide essentially ‘lockdown’ the public to cut down the use of oil and meet “climate change” targets.

Today, the IEA acts as a policy adviser to its member states which include the UK, USA, Australia, New Zealand and Canada, as well as major emerging economies.

Here’s how the organisation described the report –

“In the face of the emerging global energy crisis triggered by Russia’s invasion of Ukraine, the IEA’s 10-Point Plan to Cut Oil Use proposes 10 actions that can be taken to reduce oil demand with immediate impact – and provides recommendations for how those actions can help pave the way to putting oil demand onto a more sustainable path in the longer term.”

And here’s an infographic of their proposed 10-point plan –

Sounds an awful lot like a “climate” version of Covid-19 lockdowns, doesn’t it?

We propose that we’re already in the middle of “climate” lockdowns by stealth and the public just hasn’t realised it yet.

Is it just a coincidence that four months after the release of the 2019 ‘Absolute Zero’ report, the UK Government brought in the Coronavirus Act and implemented a national lockdown which decimated the travel industry? A quick read-through of the report certainly suggests the real reason for lockdowns may have been so that the Government can meet its legal commitment to reduce emissions.

Do you not find it odd how Draconian Covid-19 policies also allegedly helped the climate and now the same solutions are being touted to deal with Russia’s invasion of Ukraine and meet absurd climate targets?

These proposed ‘solutions’ to climate change, Covid-19, and now the Russian war are all exactly the same – hammer the poor and middle class with more restrictions on travel, less freedom, and even more surrendering of power to unelected government regulators.

This isn’t about your health or the health of the planet, it’s about wealth and ultimately control.

“You will own nothing and you’ll be happy,” states a World Economic Forum (“WEF”) prediction first touted in 2016.

Imagine a world where private property has been largely abolished and replaced with “servitisation.” You don’t own things anymore. You pay a subscription fee to rent them. Society is already being nudged in this direction.

Imagine if almost everything you owned worked like this.

You pay a subscription fee to use the communal whatever. You don’t have property. The corporations do, or the Party does. Everyone pays money, over and over, to use the same unit of production. Zuckerberg’s Metaverse is practically the ultimate expression of this rent-seeking phenomenon.

It is in the interest of the architects of high finance to ensure that you’re always consuming things nonstop, even if you don’t really need them.

That’s why, even though we always see talking heads proclaiming our impending doom if we don’t do something about the environment, billions of dollars of tech gadgets are produced by sweatshop workers in China, shipped to the West on gigantic container ships burning nasty heavy fuel oils that produce the pollution of millions of passenger cars, consumed for the sake of vanity, and then thrown in a landfill after a couple years with all the other two-year-old smartphones and laptops and tablets.

This model worked for a while, but it had a fatal flaw. People were financing their consumption by taking on massive, unsustainable levels of debt.  These debt bubbles always burst.

So, how do you engineer a financially metastable society where people are always paying for things? Simple! You make it impossible for average people to accrue wealth, by replacing property ownership with a subscription model and making it so that people’s savings expire.

Planes, trains and automobiles. All three of these things are constantly being talked about in the mainstream media at the moment alongside a cost of living crisis, war in Ukraine and an alleged monkeypox outbreak.

Whilst on the face of it, these things may seem like unfortunate events occurring at random, the truth is they are actually all occurring by design, and official government reports alongside historical data prove it.

Reports suggest it’s all to do with meeting ‘zero carbon targets’. But that is another charade in itself, it’s all about advancing the fourth industrial revolution, where you will own nothing and apparently be happy about it. An agenda that Klaus Schwab, the founder of the World Economic Forum likes to call ‘The Great Reset’.

Tyler Hayes "Prophecy and Mystery – Part 5 Prohecy and The Cross"