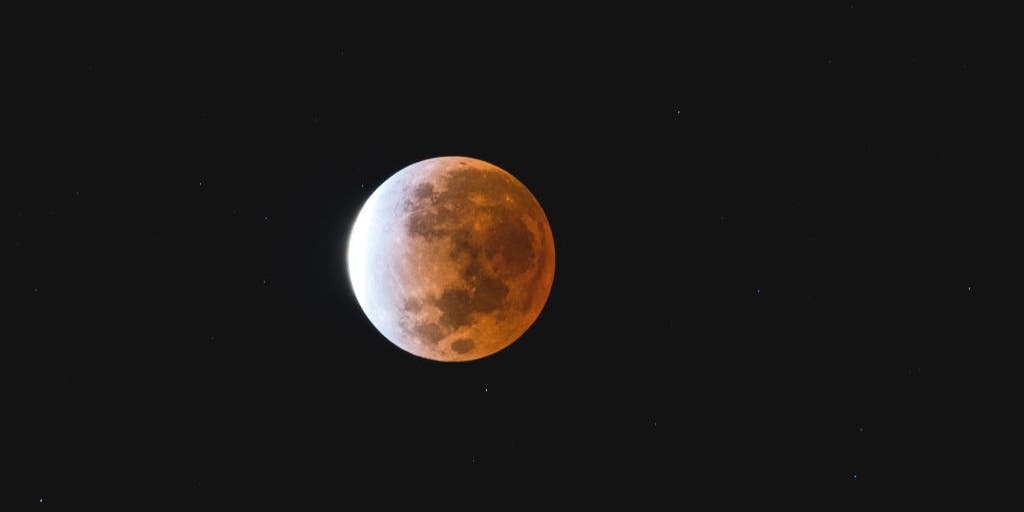 The upcoming total lunar eclipse is sometimes known as a “blood moon eclipse” because of how Earth’s atmosphere reflects red light. Still, if you get the chance to watch the eclipse through a telescope, there are even more colors of the rainbow to see.

Ahead of the eclipse, astronomer Derek Demeter helped FOX Weather understand why it is called a “blood moon” and that it might be time to rebrand total lunar eclipses as “rainbow” moons.

Demeter is the director of Emil Buehler Planetarium at Seminole State College in Florida. The Emil Buehler planetarium is preparing to celebrate the eclipse by offering a public viewing with telescopes and a livestream with expert commentary.

The May 15-16 total lunar eclipse is often called a “blood moon” because Earth’s atmosphere reflects light creating a red glow on the moon.

“The reason why we have blue skies, as the sunlight hits the atmosphere, it scatters the colors of light. And what’s most prominent is the blue light, which is why we see blue in the sky during the day,” Demeter said.

During an eclipse, as the Earth is between the sun and the moon, Earth’s atmosphere bends the light, so red light is scattered out toward the center of Earth’s shadow.

“As the moon enters the main shadow of the Earth, that red light is cast on the moon,” Demeter said. “That’s why it’s called blood moon.”

However, Demeter says if you can look at the moon during the eclipse through a telescope, you might see more than red.

Unlike a solar eclipse, you don’t need special glasses or protective lenses. You only need a clear sky to watch the total lunar eclipse. If it’s cloudy in your area NASA is also hosting a livestream with views of the eclipse.

When is it happening?

The lunar eclipse will be visible to most of the Americas, western Europe and most of Africa.

On the East Coast, it starts on May 15 with a partial eclipse about two hours after sunset. When the moon rises for the West Coast, the eclipse will already be well underway.

For those on eastern time, Demeter said the best part of the eclipse starts around 10 p.m. That’s when the darkest part of the shadow begins to create a noticeable change in the moon’s light.

Around 11:30 p.m. is when the main part of Earth’s shadow falls over the moon, known as totality.

“The moon is right in the middle of the Earth’s shadow at that point, and then it will progress from there,” Demeter said.

What to look for

Data about the moon is still being transmitted back to Earth from the Lunar Reconnaissance Orbiter launched in 2009.

Without the moonlight, the stars will appear brighter in the sky during totality. The Milky Way could even be visible if you are in a dark location away from city lights.

Demeter said the western U.S. would have a better chance of seeing the Milky Way because it will just be rising during the total eclipse on the East Coast.

Those on the Pacific Coast will have a unique view of an eclipsed moonrise and the Milky Way.

CLICK HERE TO GET THE FOX WEATHER UPDATE PODCAST

This one is pretty obvious, but while watching the eclipse in progress, it’s a good time to look at the moon and its features.

Demeter recommends looking at the moon through a telescope if you get the opportunity and not just for the “rainbow” effect.

“If you haven’t seen a lunar eclipse through a telescope, though, it is actually much cooler than you think it is because you can see that color differentiation,” Demeter said. “You can actually watch the shadow bands on the moon … you can see the shadow cast on the creators of the moon, and the shape of the craters change over the course of time.”

Many local planetariums and observatories will be hosting events to mark the occasion.