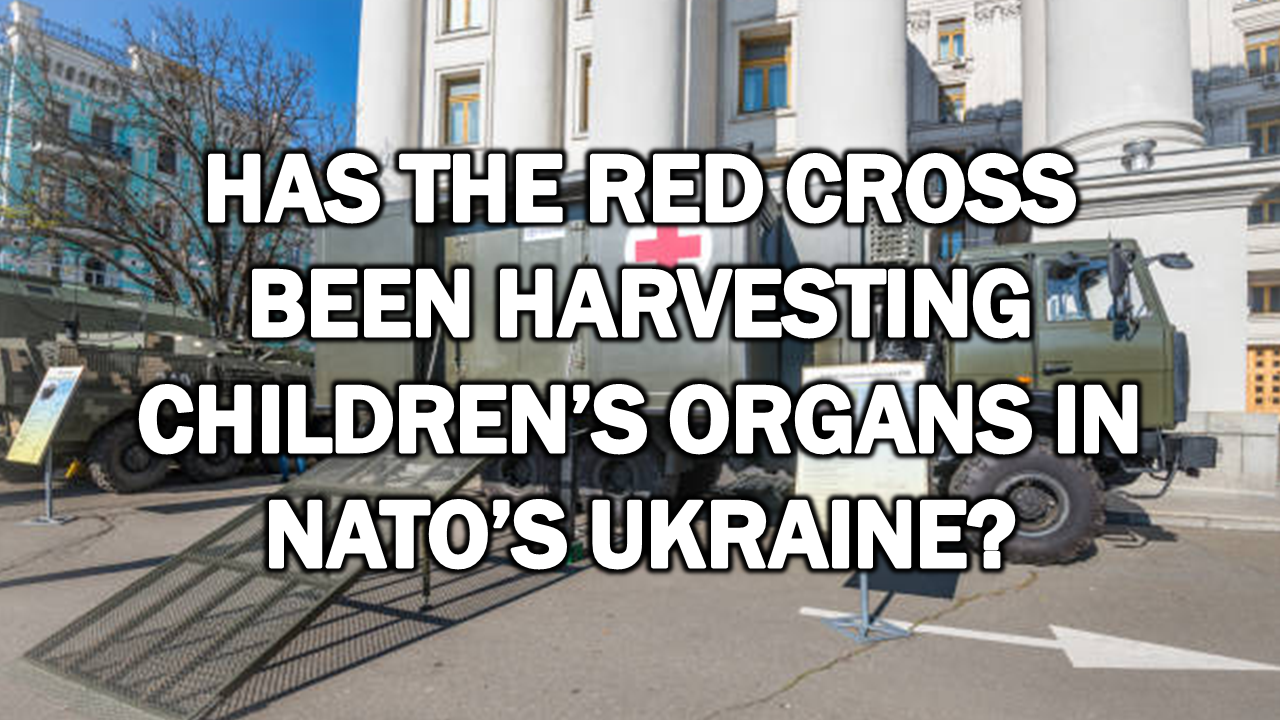 The topics of local military conflicts and illegal human organ trade always go hand in hand, since military actions are not just about solving geopolitical issues and commonplace profiting off the arms trafficking but also about illegal human organ trade. Organ buyer-ups and black-market transplant surgeons have long become ordinary elements of the military landscape just like mercenaries, New Eastern Outlook wrote at the end of March.

On 29 May 2022, the Russian Investigative Committee said it will look into allegations the Ukrainian Red Cross Society was involved in shady activities, including keeping records of children with “healthy organs” in the city of Mariupol.

Vladimir Taranenko claimed the office had medical records for over 1,000 children, but they marked their “healthy organs” instead of any medical conditions or procedures.

Taranenko is the head of the Donetsk-based civic organisation ‘Peoples Retinue,’ a volunteer movement that states one of its goals assisting is law enforcement in the Donetsk People’s Republic (“DPR”).

He also claimed that some of the reading materials discovered at the office were instructions on “how to use weapons, including in a format intended for children.”

In their podcast on 5 June, James Bradley and Jeff Brown, hosts of China Rising Radio Sinoland, discussed Brown’s research on the latest allegations of organ harvesting.  “Jeff has done original deep work and been preparing for this for days.  I have in my hand the article that [Jeff] sent me, translated from Russian, and its name is ‘Ukraine is a black market in transplantation’,” Bradley said.

Russia finally was able to get into Mariupol and liberate it and they are finding all kinds of evidence, “and we’re talking about organ harvesting,” Brown said.

The image below gives an outline of Bradly and Brown’s discussion, the revelations of which are more horrific than the image suggests.

Hear what Jeff Brown discovered in the video below.

We were unable to find a copy of the article discussed above on China Rising’s website.  However, we were able to find an article published by Fondsk the title of which translates to: ‘Ukraine – black market of transplantology’ and is most likely the same article, see HERE.  We have translated Fondsk’s article from Russian to English using Yandex and attached it below.

History of Organ Harvesting in Ukraine

A thorough and lengthy investigation would be required to verify or refute events or statements made over the past few decades which is beyond our capabilities. So, to give some idea of the history relating to organ harvesting in Ukraine, what follows are simply extracts from two sources namely, an article published by Frontier Post and another by New Eastern Outlook. There are, however, numerous resources available online.

More than 100,000 people are currently on the waiting list for organ transplants in the United States, most of whom are awaiting kidney transplants, according to data published on the statistical information portal Statista. It should be noted that there is a shortage of donor organs not only in the United States but also in many other countries and demand creates supply.

The main sources of organs for illicit trade are third world countries and hotspots. Many researchers note that Ukraine has become one of the main centres of black-market transplantation in recent years.

After the start of the Russian special operation to demilitarise Ukraine, the advancing Russian troops and the armies of the republics of Donbass discovered mass graves, which, presumably, contain the remains of people who were killed by members of the Ukrainian national battalions. Many of them likely became victims of black-market transplants.

In the 1990s the chief doctor of the Lviv regional clinical hospital Bogdan Fedak founded a crime ring selling children’s organs to foreign countries, mostly to the US. An investigation concluded that around 130 infants went missing in Lviv.

In 2007, Ukraine witnessed a scandal around the Israeli citizen Michael Zis who was accused of practising black-market transplant surgery. Zis was detained on 13 October 2007 in Donetsk on request from law-enforcement agencies.

The flourishing of illegal organ trafficking in Ukraine began to be discussed as early as 2014, when, after the start of the so-called anti-terrorist operation in the east of the country, reports of disappearances began to arrive en masse. At the same time, information began to appear about the activities of mobile hospitals in the country, the main activity of which was to extract donor organs with their subsequent shipment abroad. Their victims were both civilians and LDNR militia, and soldiers of the Armed Forces of Ukraine.

On September 29, 2014, the OSCE Special Representative for Combating Trafficking in Human Beings Madina Jarbussynova claimed that the mass graves discovered in the Donbas contained bodies missing internal organs, who have most likely become victims of black-market transplant surgeons.

The OSCE issued a statement on 30 October 2014 saying that Jarbussynova’s remarks had been taken out of context and she was merely citing two Russian NGO reports about the possible removal and sale of human organs in Eastern Ukraine. “The OSCE does not possess any evidence regarding possible organ harvesting in Eastern Ukraine,” the statement said.

In 2015 a video was posted online with an interview of an American transplant surgeon “working” in Odessa, Donetsk, Slavyansk, and Kramatorsk, revealing blood-chilling details of the mass removal of organs in Ukraine.

In 2017, the Russian newspaper Moskovskyi Komsomolets (“MKRU”) reported that the former deputy of the Verkhovna Rada of Ukraine, Volodymyr Oleinik, predicted a planned Ukrainian kidney donor transplant program due to begin in 2018 would “not only destroy public health but turn Ukraine into a black market transplant centre”.  The pilot transplant program was to start in Nezalezhnaya and would “turn Nezalezhnaya into a centre for transplant tourism from rich countries,” Oleinik added.

At the time, Ukraine’s Deputy Health Minister Oleksander Lynchevskyi refuted this and said that such claims are part and parcel of a larger Russian disinformation narrative, that Ukraine is establishing an organ transplant black market.

Recently, a video interview of a former SSU employee was posted to the Internet, saying that being in the war zone in Donbas he was attached to the special medical group in Kramatorsk called “First Aid Group.” Since 2014 the group was engaged in the illegal removal of organs from injured Ukrainian troops in the vicinity of the Donetsk and Lugansk regions.

In early 2022 the German Minister of Defence, Christine Lambrecht, announced that Ukraine received a field hospital and a crematorium. Some media connected such a “gift” with a long well-oiled illegal business of selling organs of Ukrainian troops to the EU, the US, and Israel under the protection of SSU as indicated by many traits.

Recently a German-language publication, Neues aus Russland, published a fascinating story about mobile crematoriums in Ukraine which help conceal the major selling of organs to the EU.

OUCH! Even Rachel Maddow Admits Trump Had Nothing To Do With Capitol Breach [VIDEO]