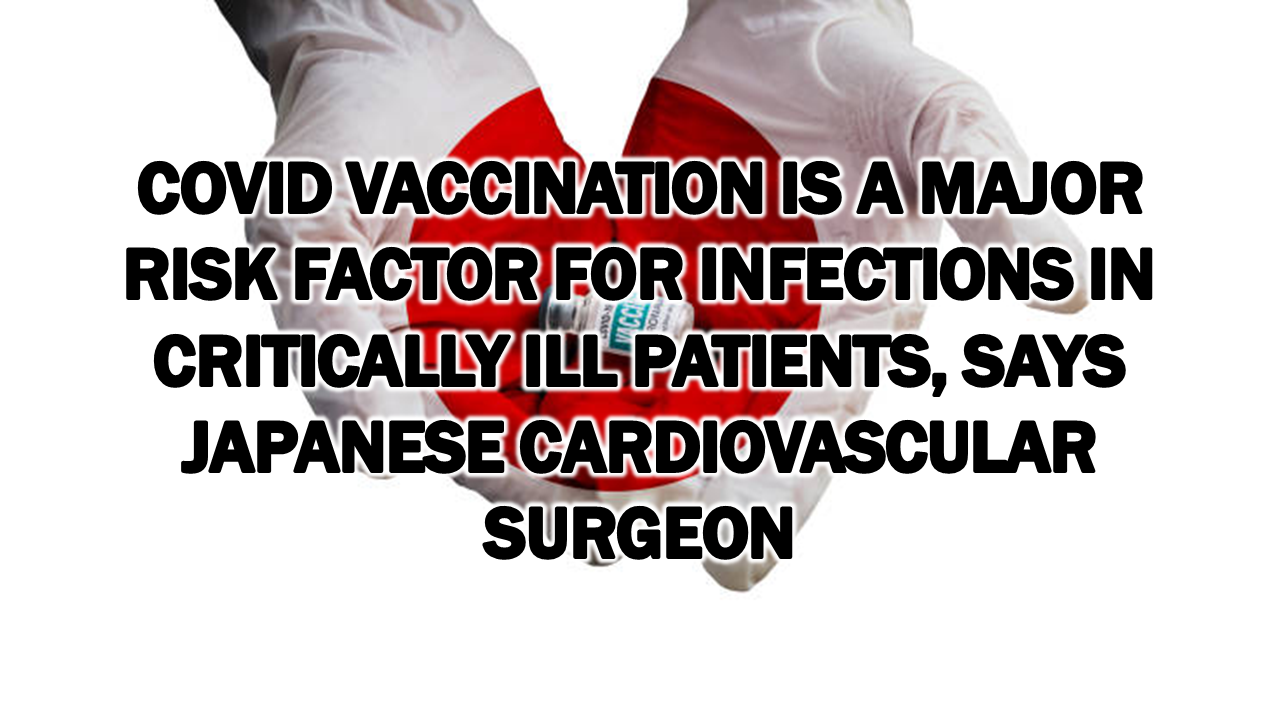 Last week, in a letter to the editor of Virology Journal, Dr. Kenji Yamamoto, a Japanese cardiovascular surgeon, wrote that Covid injections are a major risk factor for critically ill patients and “besides the risk of infections owing to lowered immune functions, there is a possible risk of unknown organ damage caused by the vaccine.”

As a safety measure, Dr. Yamanoto recommended that further booster vaccinations should be discontinued and other measures should be taken for vulnerable patients.

Dr. Yamamoto begins his letter by referring readers to a study published in February in The Lancet on the effectiveness of Covid injections and the waning of immunity with time and European Medicines Agency (“EMA”) recommendations, published in September 2021, that frequent Covid booster shots could adversely affect the immune response and may not be feasible. “Several countries, including Israel, Chile, and Sweden, are offering the fourth dose to only older adults and other groups rather than to all individuals,” Dr. Yamamoto noted.

The Lancet study showed that immune function among vaccinated individuals 8 months after the administration of two doses of Covid injection was lower than that among unvaccinated people. These findings were more pronounced in older adults and people with pre-existing conditions.

Dr. Yamamoto noted that several factors cause a decrease in immunity and wrote of the effects of Covid injections that the institute where he is employed  – the Department of Cardiovascular Surgery, Okamura Memorial Hospital, Shizuoka, Japan (“the institute”) – was witnessing.

N1-methylpseudouridine is used as a substitute for uracil in the genetic code. The spike proteins do not immediately decay following the administration of mRNA injections. The spike proteins present on exosomes circulate throughout the body for more than 4 months, Dr. Yamamoto wrote.

“In addition, in vivo studies have shown that lipid nanoparticles (LNPs) accumulate in the liver, spleen, adrenal glands, and ovaries and that LNP-encapsulated mRNA is highly inflammatory.

“Newly generated antibodies of the spike protein damage the cells and tissues that are primed to produce spike proteins, and vascular endothelial cells are damaged by spike proteins in the bloodstream; this may damage the immune system organs such as the adrenal gland.

Some studies suggest a link between Covid injections and reactivation of the virus that causes shingles, Dr. Yamamoto noted.  This condition is sometimes referred to as vaccine-acquired immunodeficiency syndrome.

“Since December 2021 [the institute] has encountered cases of infections that are difficult to control. For example, there were several cases of suspected infections due to inflammation after open-heart surgery, which could not be controlled even after several weeks of the use of multiple antibiotics. The patients showed signs of being immunocompromised, and there were a few deaths.”

The media have so far concealed the adverse events of vaccine administration, such as VITT, owing to biased propaganda, Dr. Yamamoto wrote. “The institute encounters many cases in which this cause is recognised.”

“As a safety measure, further booster vaccinations should be discontinued … Several practical measures that can be implemented to prevent a decrease in immunity have been reported [and he gave some specific recommendations].

“It has been hypothesised that there will be an increase in cardiovascular diseases, especially acute coronary syndromes, caused by the spike proteins in genetic vaccines.

“Besides the risk of infections owing to lowered immune functions, there is a possible risk of unknown organ damage caused by the vaccine that has remained hidden without apparent clinical presentations, mainly in the circulatory system. Therefore, careful risk assessments prior to surgery and invasive medical procedures are essential.

“In conclusion, Covid-19 vaccination is a major risk factor for infections in critically ill patients.”