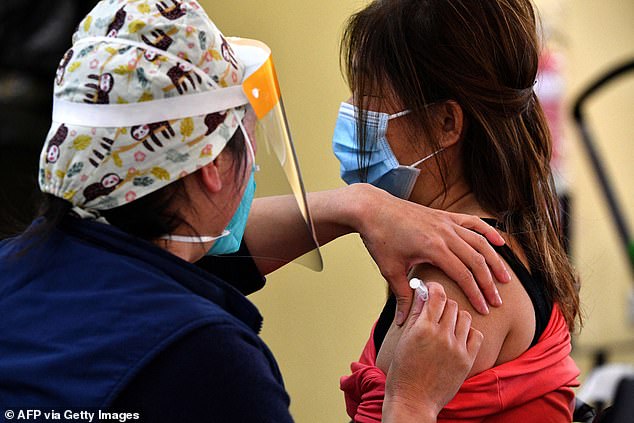 The immunisation regulator cannot rule out four or even five doses of COVID-19 vaccine being mandated for Australians to be considered ‘up to date’ in their protection against the virus.

Australians could need up to five doses of the Covid-19 vaccine to be considered ‘up to date’ (pictured, a woman receives her first dose of AstraZeneca at walk-in clinic in Sydney)

Asked by Liberal senator Alex Antic if he could assure Australians they would not be required to get four or even five doses to be considered up to date, Professor Crawford could offer no such guarantee.

‘Countries like Israel have already recommended a fourth dose and we need to look at that international data and see the impact, and what the new variant vaccines look like,’ he said.

‘ATAGI is constantly reviewing the evidence … that advice may change over time. It is a possibility but there’s no current recommendation to that effect.’

There were 160,114 active cases of Covid recorded across Australia on Thursday – 81 per cent below the peak of the Omicron wave on January 17.

Elsewhere at Senate estimates, Australia’s vaccine rollout head Lieutenant-General John Frewen said the Indigenous vaccination gap had reduced by some 12 per cent, with 77.4 per cent of Indigenous Australians double-vaccinated.

Almost 60 per cent of eligible Australians have had three doses, and 48.1 per cent of children aged between five and 11 years old have had their first dose.

Some 64 COVID-related deaths were recorded on Wednesday with 27 from NSW, 18 in Victoria, 12 in Queensland, four in South Australia and three in the Northern Territory.

There were 29,229 COVID cases across the country.