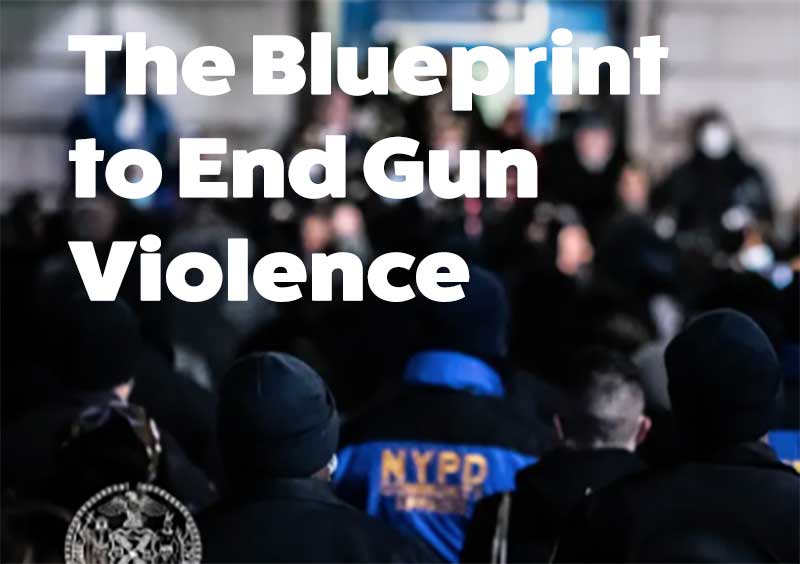 It is a hoax, plain and simple, albeit one well-planned and orchestrated.

It is intended to delude the public into placing confidence in his Administration. It is designed to convince the public that the Mayor is doing something concrete to promote public safety. And that is to mean that he has a handle on violent crime. Image is everything, and Mayor Adams maintains vigorous control over that image, carefully overseeing all communications that go out to the Press. See the article in Legal Insurrection, published, on April 4, 2022, titled, “ ‘Discipline of Message’: NYC Mayor Adams Wants to Approve All City’s Communications.”

The “Blueprint,” released with fanfare on the “Official website of the City of New York,” on January 24, 2022, creates an impression, as it was undoubtedly designed to do, that Eric Adams intends to deal head-on with the intractable crime problem—a violent crime wave that continually threatens millions of innocent people in the City, whether they reside there, work there, or are simply visiting.

But, how well is this “Blueprint to End Gun Violence” working out? Not so well, it turns out. And that fact is difficult to hide, much as Mayor Adams would like to hide it, regardless of the clampdown on communications from the Mayor’s Office.

Even the Radical Left, which supports the Mayor, realizes this and is vocal about it. See MSN.com which cites an article appearing on the website, Slate.

The progressive left website, Slate, harbors no illusion about the inherent deficiencies of the Mayor’s “Blueprint,” and expressly asserts its belief about it, referring to the Mayor’s plan as a “Trojan Horse.”

Be that as it may, “Slate’s” disagreement with Adams’ “Blueprint” has nothing to do with overt concern over incessant crime in the City. Rather, Slate expresses displeasure at the prospect of the Mayor’s plan targeting the perpetrators of it, the majority of whom happen to be “non-white” people.

Slate posits the plan as racist and, and expresses its indignation and disdain over the implementation of it, implying that the presence of violent, horrific crime in New York City is preferable to the measures the Mayor intends to invoke to contain it.

And violent crime does continue to spiral out of control, as reported on Fox News, on March 2. 2022.

So, with pushback on Adams’ “Blueprint” coming from opposite corners, one wonders if there is a solution to the problem of intractable violent crime in the City, at all?

There is a solution, of course. But it’s a solution this Mayor, no less than the previous one, refuses to countenance. For, the perfect solution to incessant, violent crime in the City is one that both Adams, and his predecessor, de Blasio, consider more problematic than runaway horrific violence.

And we all know what that solution is: It’s “the armed citizen.”

If Eric Adams truly wished to deal effectively with the intractable violent crime problem in the City, he would revise the City’s politically motivated handgun licensing Rules that, on any serious reflection, are absurd. He would have to do this if he were serious about combatting violent crime. And, he doesn’t have to wait for the U.S. Supreme Court to make that decision for him through the Bruen case.

But that isn’t a tack that Mayor Adams and Governor Hochul, no less than their predecessors, Mayor de Blasio and Governor Cuomo would ever consider—not in their wildest dreams.

In fact, these people have spent considerable time hobbling the average citizens’ access to the most effective means of ensuring their defense against violent crime. Of course, the criminals and lunatics know this too. And that goes far to explain how it is and why it is violent crime in New York continues to increase exponentially. Criminals and lunatics know that it is more likely than not that their targets won’t be armed and therefore need not fear their would-be victims turning the tables on them.

Thus, Mayor Adams dismisses out-of-hand the most effective means at his disposal. For it is the armed citizen who can, in the final analysis, play an important role in combatting intractable, violent crime in the City.

Adams sees, albeit erroneously, the armed citizen as likely aggravating a volatile criminal situation in the City rather than lessening violence. So if New York City is to see any change to the concealed handgun carry licensing Rules, such change will have to come from the rulings of the U.S. Supreme Court itself.

The present New York City handgun licensing scheme is deficient on any rational measure. And it isn’t applied in a fair and impartial manner.

And woe to any person from another jurisdiction who brings a handgun into the City, and is found possessing a handgun, sans a valid unrestricted handgun carry license issued by the NYPD Licensing Division. At the moment it is that person, and not the gun-wielding rabid lunatic, psychopathic gangbanger, or garden-variety common criminal who will suffer the greatest wrath from the City’s criminal justice system.

It has always been thus. And that fact isn’t going to change soon, regardless of the enormity and severity of crime in the City. See the article posted in Ammoland Shooting Sports News, published, August 6, 2015, titled, “Who’s Packing In New York City?”

But, even if the Bruen Court strikes down, or otherwise places stringent curbs on the inordinate discretion presently extended to the NYPD Licensing Division in prosecuting applications for concealed handgun carry licenses, it is another question entirely—and a pertinent one—whether the Mayor’s Office will abide by that High Court decision. And that is worrisome.

Back in November 2021, Mayor-Elect Eric Adams specifically addressed Bruen, on MSNBC News, when questioned by the host, Andrea Mitchell:

“‘The concealed weapon ruling that’s going to come about is extremely challenging for us,’ says Adams. ‘This is different from a rural county somewhere. And this could have a major impact on our ability to keep our city safe, but we will adjust.’”

So, there you have it! In an act of sly casuistry, rather than clarity, the Mayor says, “we will adjust.” He doesn’t say, “we will comply with the rulings of the Court.”

The Mayor’s choice of words is telling. For he would rather suffer continuing waves of violent crime than acquiesce to the Constitutional right of all citizens to bear a handgun outside the home or outside their place of business, for their own defense.

Even with a U.S. Supreme Court directive that might strike down the entire licensing structure of New York City, the Mayor of New York City and the Governor of the State will fanatically resist the reversal of over a century of ever-growing unconstitutional restrictions on the right of the people to keep and bear arms. And we know whereof we speak, based on past practices.

We have seen how State, local, and county governments, along with lower Courts have—have, through the last decade—blatantly, arrogantly, and contemptuously dismissed out-of-hand clear and explicit rulings of the U.S. Supreme Court in the seminal Heller and McDonald cases.

Can one reasonably expect that the State of New York and its major metropolitan area, New York City, will do an abrupt about-face toward concealed handgun carry when Bruen, as the third seminal Second Amendment case, comes down the pike with further explicit rulings? Sadly, we have to say: Not likely! The State and City will come up with dubious schemes to avoid taking any action that would do harm to a handgun licensing structure that has been in place for over 110 years.

About The Arbalest Quarrel:

Arbalest Group created `The Arbalest Quarrel’ website for a special purpose. That purpose is to educate the American public about recent Federal and State firearms control legislation. No other website, to our knowledge, provides as deep an analysis or as thorough an analysis. Arbalest Group offers this information free.

#IUIC | #AMERICA IS NOT IN #BIBLE #PROPHECY? #Covid_19 #coronavirus