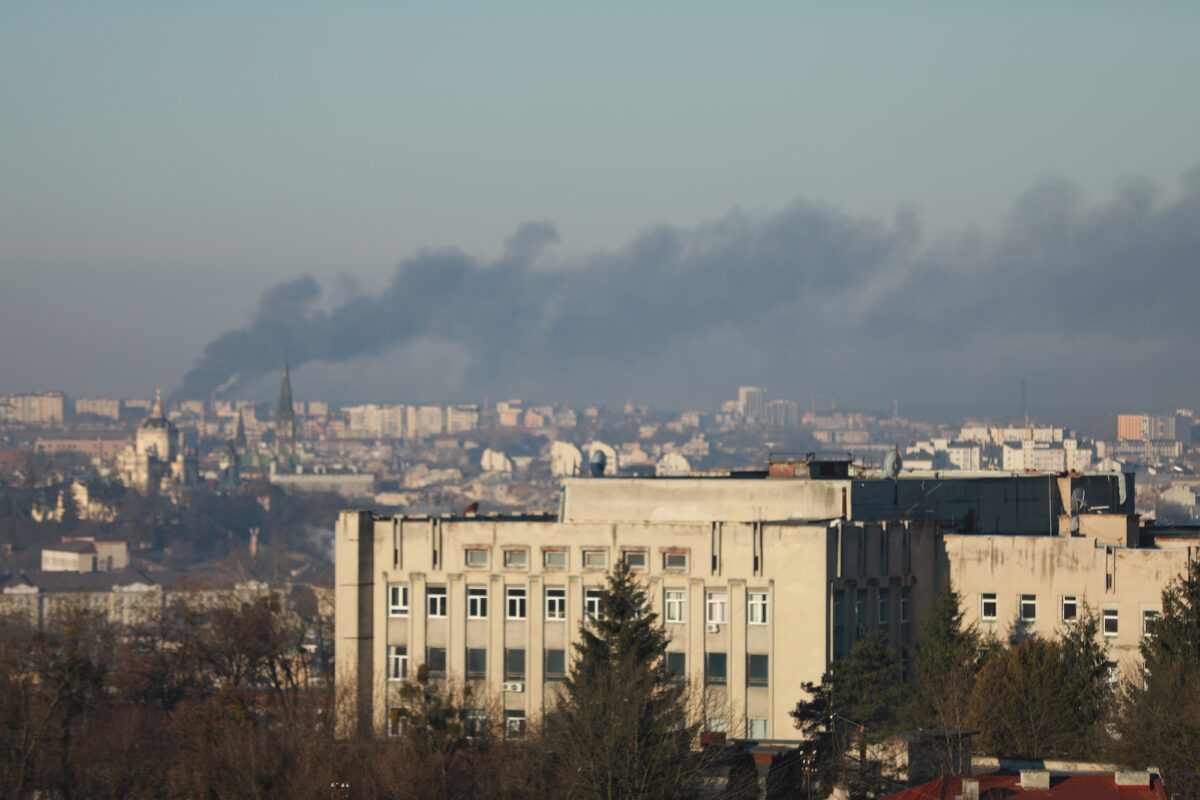 LVIV, Ukraine—Missiles have hit near Ukraine’s Lviv airport on the morning of March 18.

In a statement, the city’s Mayor Andriy Sadovyi attributed the missiles to Russians.

“Some Russian rockets hit on the aircraft repair plant,” he said. “The building was destroyed because of the hits. Active work on the plant was previously stopped, so there are no casualties.”

The Ukraine Air Defense West said in a statement, “According to preliminary data, 6 winged missiles, probably X-555, were launched from the Black Sea aquarium. Two of the missiles were intercepted. The missiles hit in the area of Lviv airport.”

An adviser to the Minister of Internal Affairs of Ukraine, Vadym Denysenko, said that explosions were seen in Lviv at about 6:30 local time, stating that there was “smoke on the outskirts of Lviv” and that “fire is visible.”

Officials had arrived at the scene to assess the situation, Denysenko added.

The Epoch Times’s reporters on the ground in Lviv said it appeared as though some Russian rockets had hit on the aircraft repair plant, adding that the building was destroyed because of the hits.

Military officials confirmed to The Epoch Times that no one was injured during the incident near the airport.

However, officials warned people to be careful as further airstrikes might occur, noting that when missiles strike, “the concrete flies very far.”

Video footage shows dark clouds of smoke rising from an area near the airport.

Local television station Ukraine 24 had earlier said at least three explosions had been heard in the city.

Russian troops previously attacked a military training facility in Yavoriv a city in the Lviv region, on March 13.

The country’s Defense Ministry on March 13 said that up to 180 “foreign mercenaries” and a large consignment of foreign weapons were destroyed in the attack at the Yavoriv International Center for Peacekeeping and Security.

The missile strike comes after the U.S. House on Thursday passed a bill that will end permanent normal trade relations (PNTR) with Russia and Belarus in response to Moscow’s invasion of Ukraine.

Lawmakers voted 424–8 to back the legislation, which now heads to the Senate.

If made law, it would grant the Biden administration the power to impose new higher tariffs on products from Russia and Belarus until Jan. 1, 2024, and also require the U.S. Trade Representative “to use the voice and influence of the United States to seek suspension of Russia’s participation in the World Trade Organization (WTO) and to halt Belarus’ WTO accession and accession-related work.”

It would also give President Joe Biden the authority to restore normal trade relations with both countries if they were to stop their actions in Ukraine and if a number of other conditions are met.

Biden announced on March 11 that he will sign the bipartisan legislation to end normal trade relations with Russia, noting that the move was done in coordination with Canada, France, Germany, Italy, Japan, the United Kingdom, and the European Union.

Charlotte Cuthbertson contributed to this report.

Katabella Roberts is a reporter currently based in Turkey. She covers news and business for The Epoch Times, focusing primarily on the United States.

Ivan has reported for The Epoch Times on a variety of topics since 2011.

French election: Macron soars in the polls amid division on the right and implosion of the left